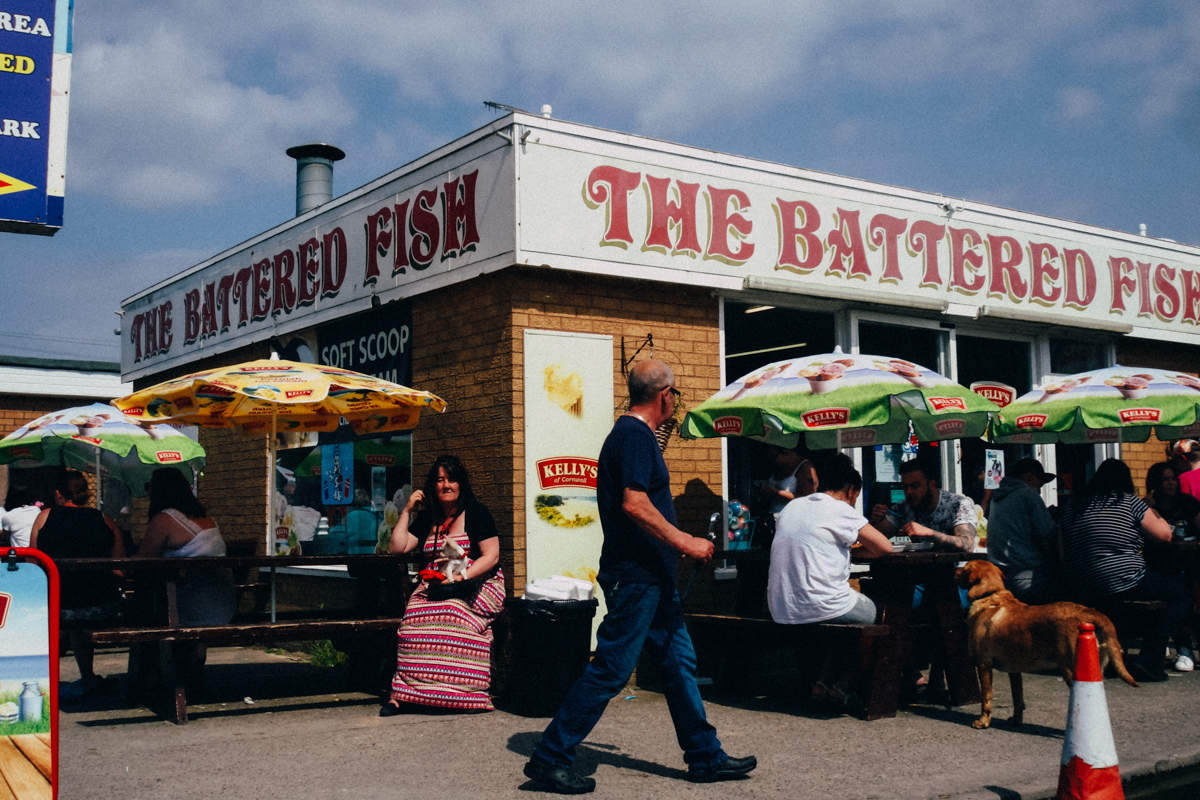 The weather has been pretty awesome this month, which is very unusual for this part of the world. In the UK, even in summer, we seem to get a few days of sun at most before it’s followed up with a week of misery and rain. For whatever reason the weather has really been kind to us recently, so when Faye suggested we take a day trip to the seaside I was really looking forward to it. We arranged to go to a place called Talacre on the North Wales coast. I’d been there before and besides having a huge lovely beach, I knew it was kitschy and had just the right amount of British seaside trash to pique my photographic interests. I was hoping to get some shots to add to my ‘beside the sea’ project. But somehow, and despite my earlier enthusiasm, I got there and I wasn’t really in the mood to take my photography seriously and I ended up coming away with only a handful of shots. This is yet another story of photographic frustration from me. Hope you’re not getting bored of this yet?! I just want you to realise you’re not alone and that we all have days where we doubt our abilities. This is just one of many, but there’s a twist at the end that made this one much more poignant for me.

In fact, I have a lot of off-days. More often than not actually. Most of the time, the reason I don’t take many photos in a day is because honestly I am not focussing on my photography. I was with Faye and I was with friends, the sun was shining and photography just wasn’t at the forefront of my mind. I try not to force myself to shoot if I’m not feeling it.

Street Photography At The Beach

The day started off quite well with the shot of the fish and chip shop at the top of this post. I had the little Sony with me which, frankly, has a terrible screen if you’re shooting in harsh sunlight, so I was pleasantly surprised with that image when I got home. It’s a bit of a messy composition, but then I have a penchant for ugly photos so your mileage may vary. 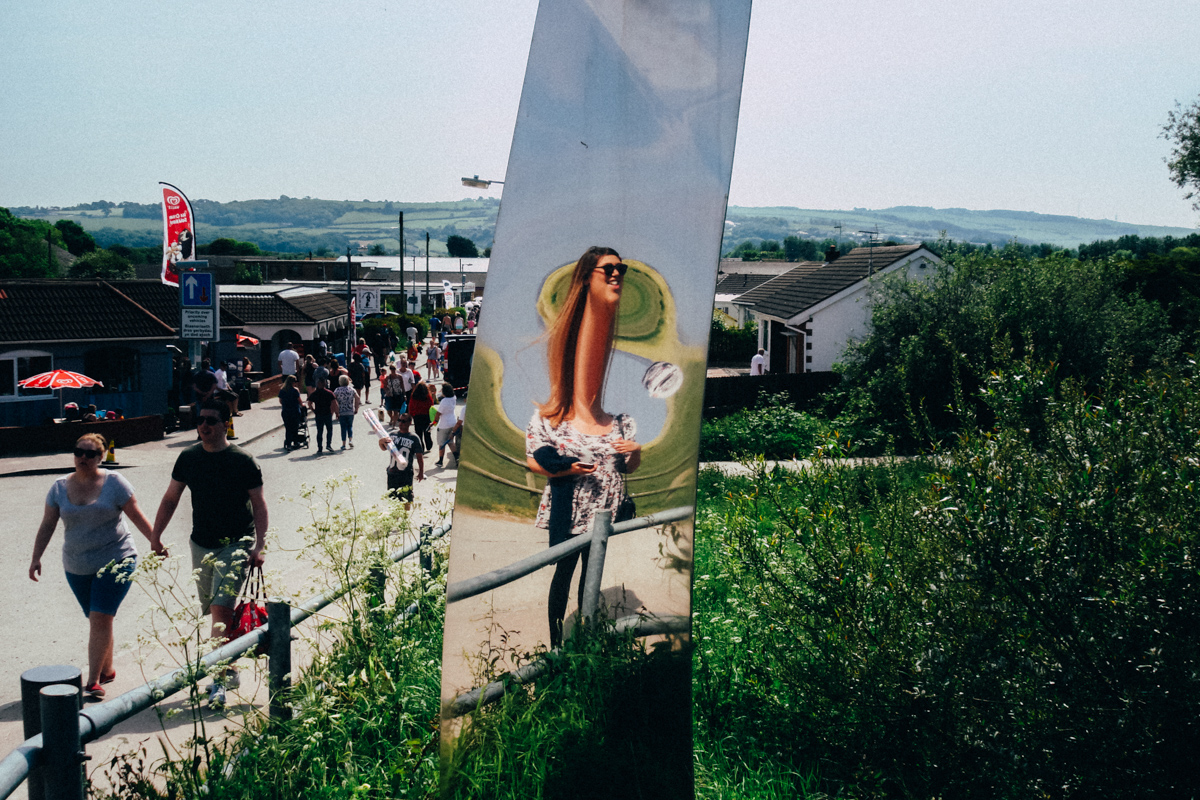 Since I started taking pictures of Faye she’s started looking for her own shots and she spotted this one while we were waiting for our friends to arrive. There was a polished stainless steel sculpture near the dunes that had a weird dimple in it that distorted her reflection. I’m always obliging when Faye wants to have her photo taken so I took the shot. It kind of reminded me of a Salvador Dali painting, and this Fear and Loathing in Las Vegas movie poster. In hindsight I wish I’d climbed over the railing and gotten closer. 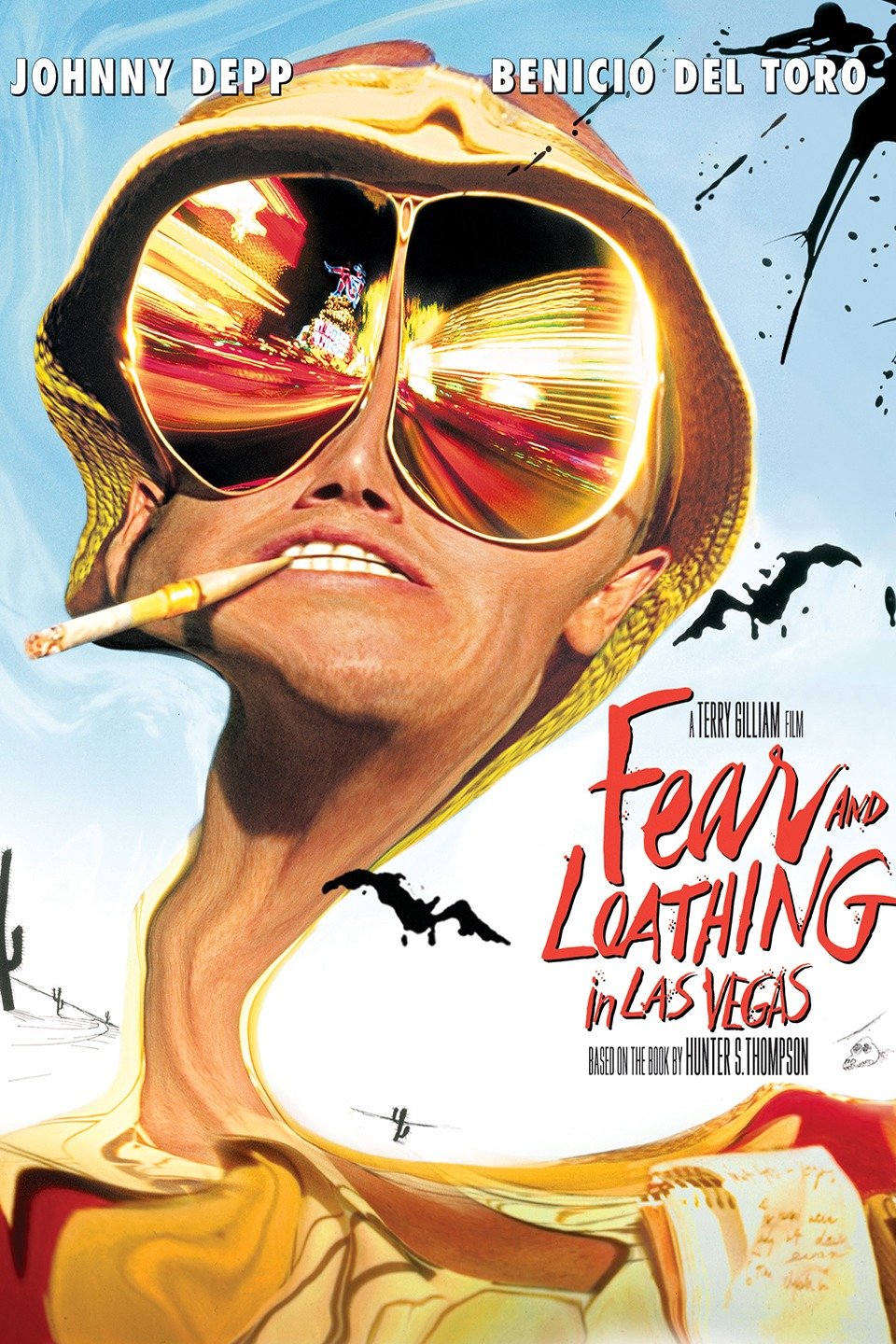 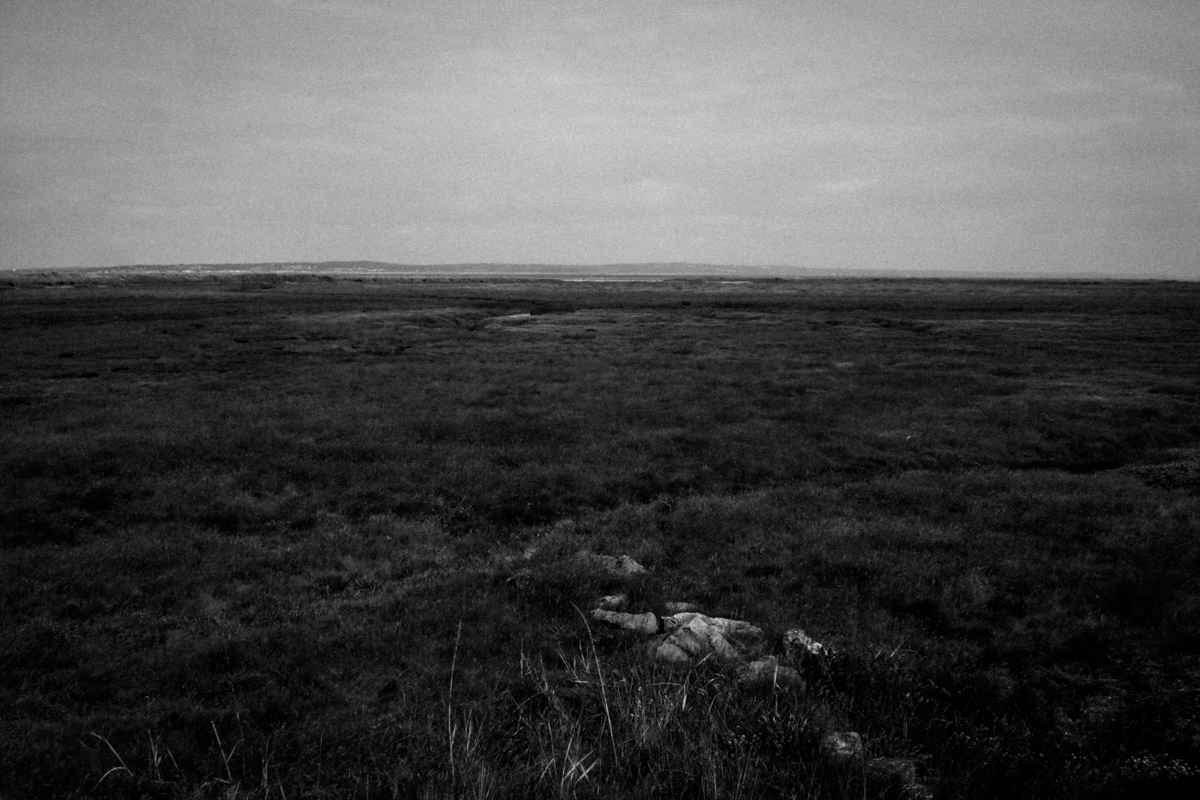 I took a few more shots while we walked down to the beach. I quite liked this hipster dude holding his cigarette. He must’ve been boiling hot in that jacket. I was wearing a tee shirt and jeans and I was sweating buckets. 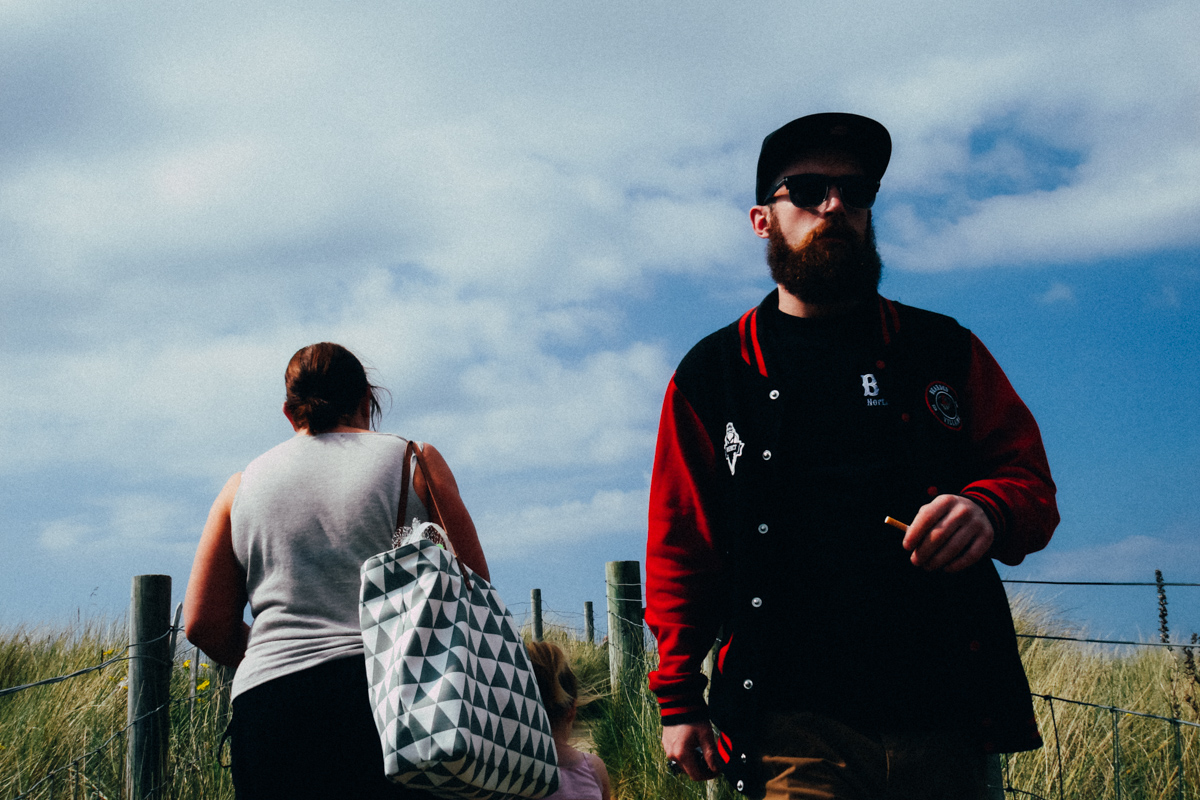 This shot of the ice cream van has a tale of slight disappointment behind it. The guy in the van had been leaning out of the window and I thought it was a cool shot. However, being used to using the Ricoh GR for with a 28mm lens when I pulled up the Sony, which has a 38mm lens, I was too close to the van and had to take a few steps back to get it all in the frame. The ice cream dude spotted me and quickly disappeared behind the left side of the window. Guess I need to practice seeing with the longer focal length, or just stick to my preferred 28mm. Probably the latter – I’m lazy. 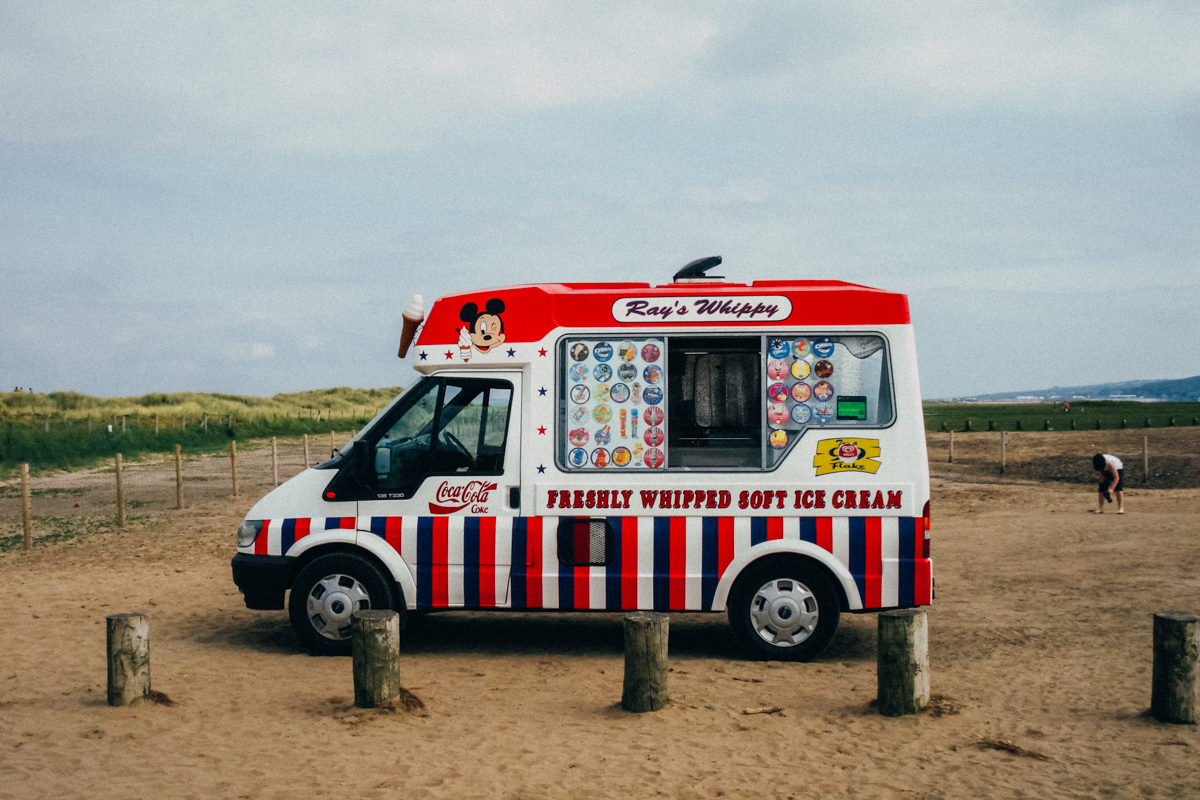 I had no idea what this young girl was doing. Some kind of freaky Michael Jackson thriller dance I think. She was having fun anyway. I wish I could go back to being that age sometimes, just to get away from the responsibilities of adult life and re-live that part of your life where you really don’t give a shit what anyone thinks of you. 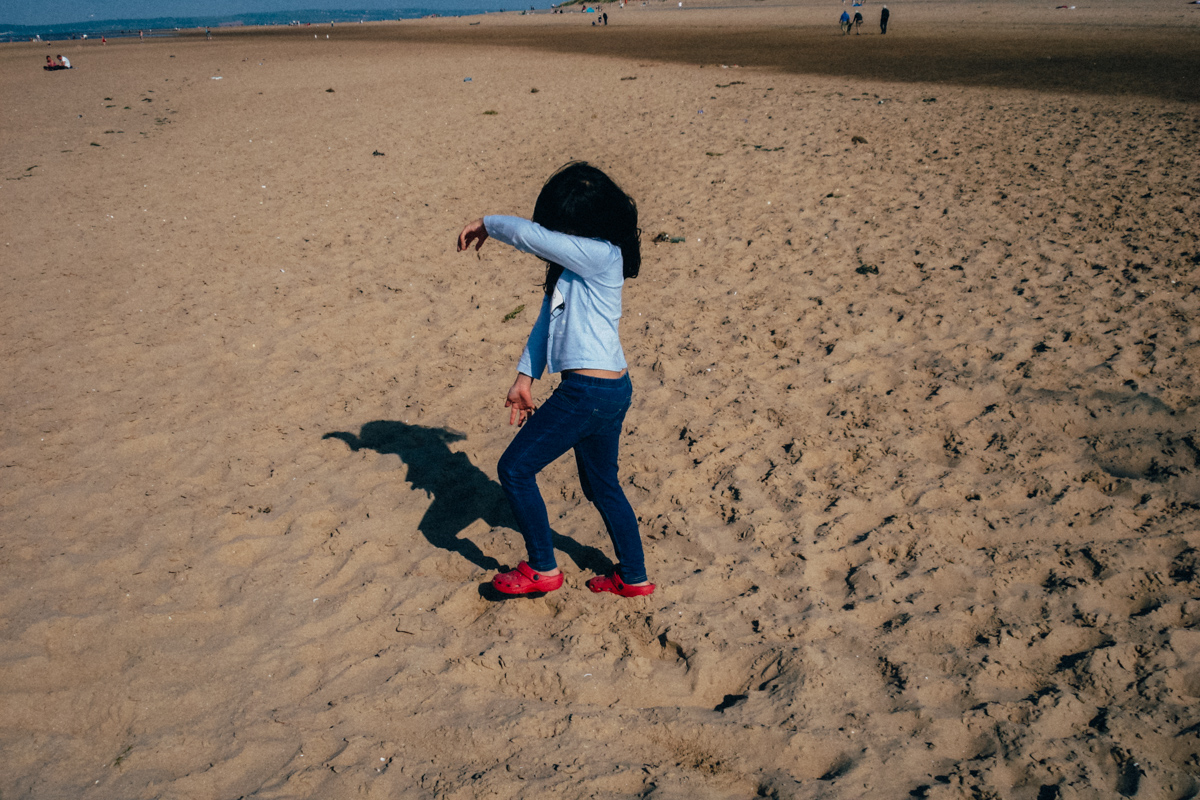 I actually took a few shots of the lighthouse, but this was my favourite. A mother trying very hard to get her kids to stand still so she could get a family photo. The fourth, and smallest child, was standing in front of the lighthouse door and is completely in shadow. The boys ran off into the sea shortly after I took this frame. 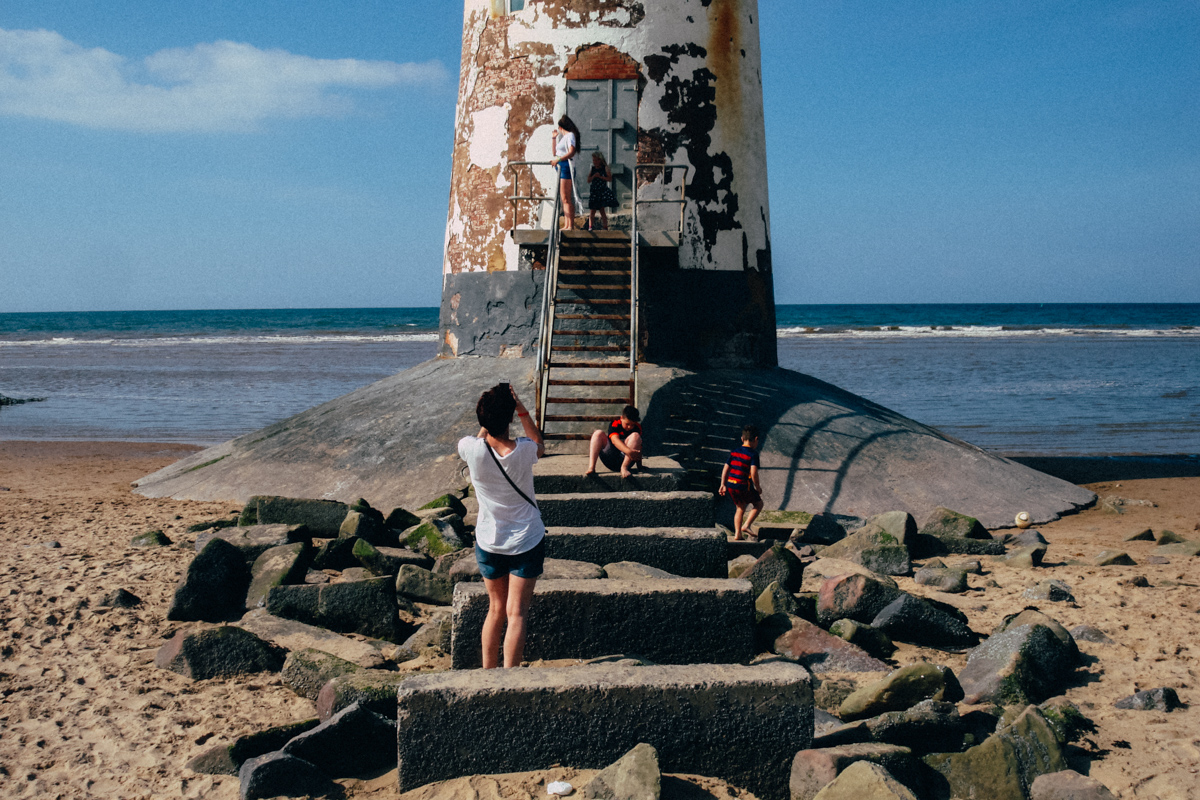 I couldn’t resist taking this shot of an overflowing bin. It pretty much sums up a weekend of sunshine at the beach for me, because it shows how busy it had been that day with thousands of people making a pilgrimage to the seaside for fish and chips, beer and sunbathing. I was pretty lucky that the girl was walking past at that time, because I never saw anyone else behind that fence all afternoon. I think most of the dunes are off limits for conservation purposes. 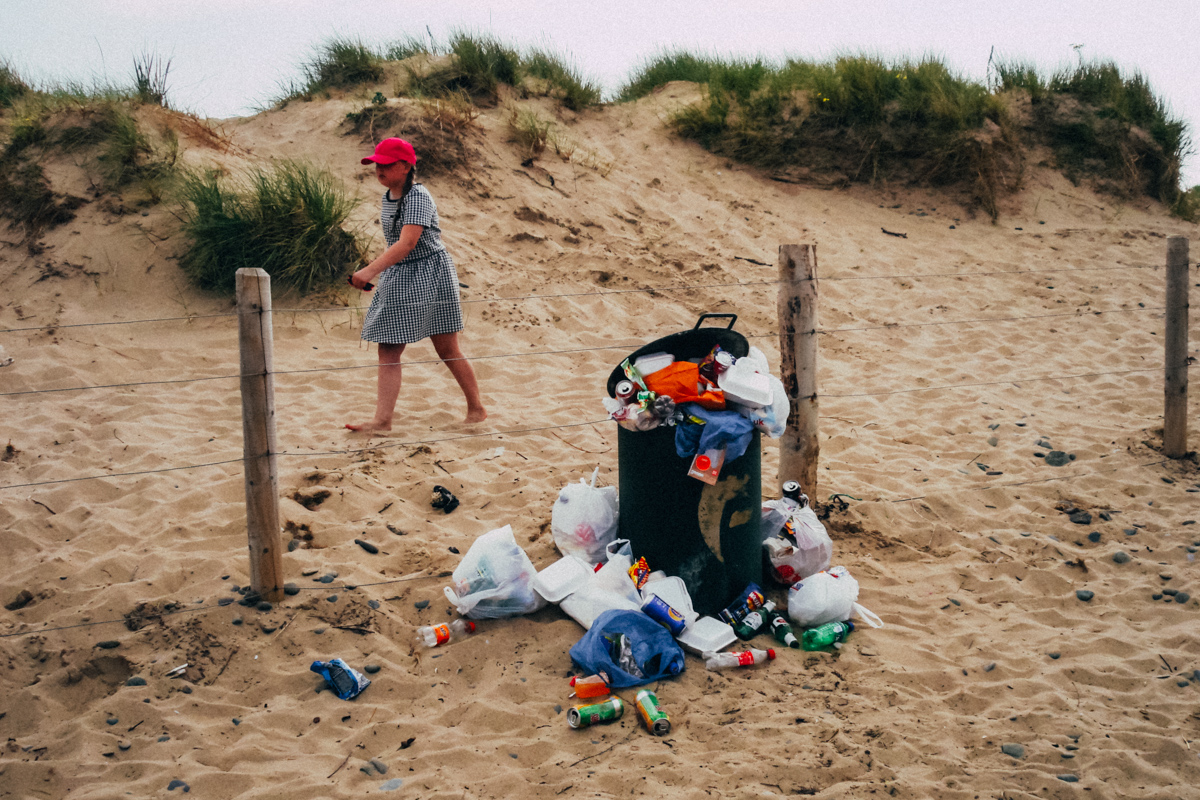 Learn something new every time you shoot

When I got home I reviewed my shots. Deleted the crappy ones, and post-processed the keepers. I’m generally happy to get one good shot from a day’s shooting and considering how few I’d taken to begin with I was fairly pleased.

That was until I looked through my phone later that evening and saw this one I’d taken on the way to the beach. 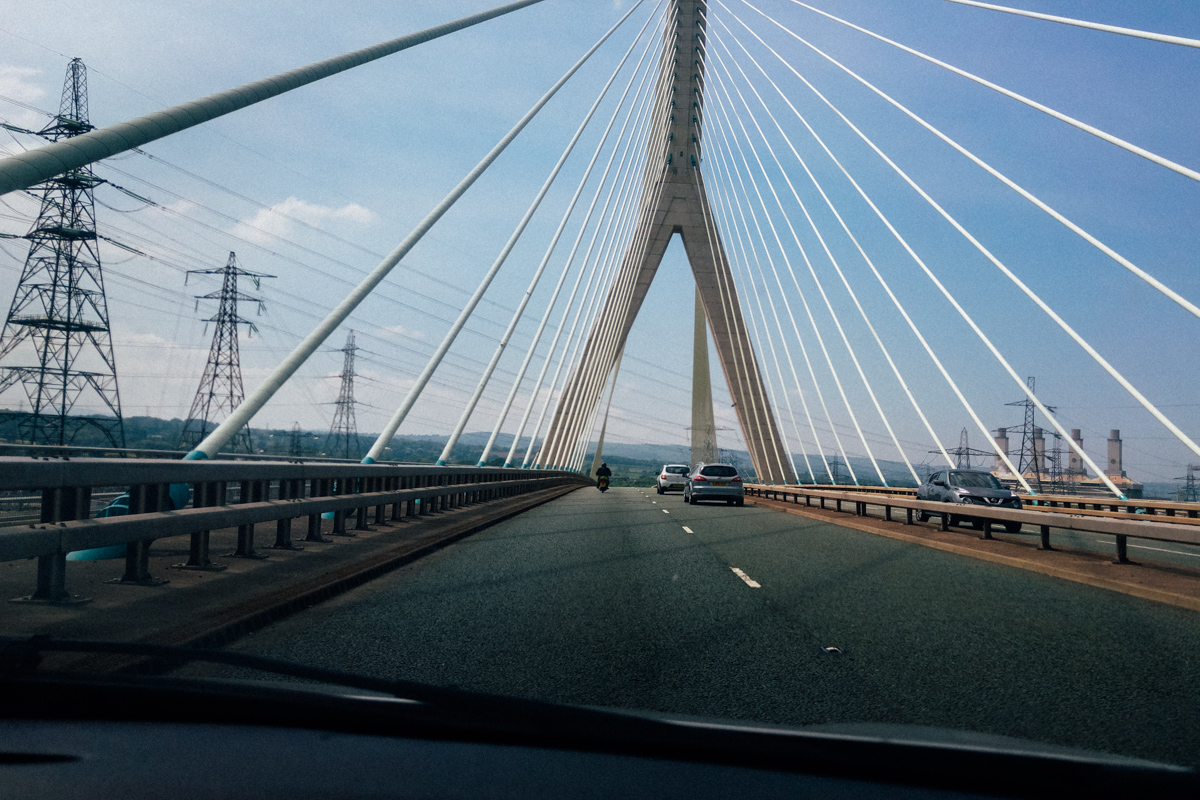 When we were driving to the beach we passed over the Flintshire bridge. I wanted to take a shot but didn’t have time to grab my camera, and I was driving so, you know, safety first and all that. So I quickly fired up the camera app in my phone and hit the shutter. I didn’t even have time to compose. The photo was taken with the phone still in it’s cradle on my dashboard; hence the wonky horizon. I never saw the photo I took and figured it wouldn’t be any good. I completely forgot about it but when I saw the photo again in my phone gallery that night, the thing that annoyed me about it was that I fell in love with it.

Having gone all that way with the intention of taking photos it bugged me that the best shot of the day was taken before I even got there and that I didn’t even think about it. As photographers, we spend so much time learning how to take good photos and we put a lot of thought into every shot. My favourite shot of the day being the complete opposite of that kind of griped me for a little while. You might not think it’s the best shot of the day, but I do. That’s the wonderful thing about photography to me; you can take a picture of something completely unrelated to what you were doing at the time but it can remind you of who you were with, what you were talking about, how you felt, etc… Maybe I liked it most cos it reminded me of our road trip in the sun with all the excitement of what was to come. Maybe I was unhappy because it made me realise that I’m not actually that good at taking photos and that really it all just comes down to luck. Maybe I haven’t improved at all in the time I’ve been taking photos. I dunno.

In the end I got over it pretty quickly, and I guess that it’s the photo that matters, not how it was made. I think that’s the lesson I learned that day.