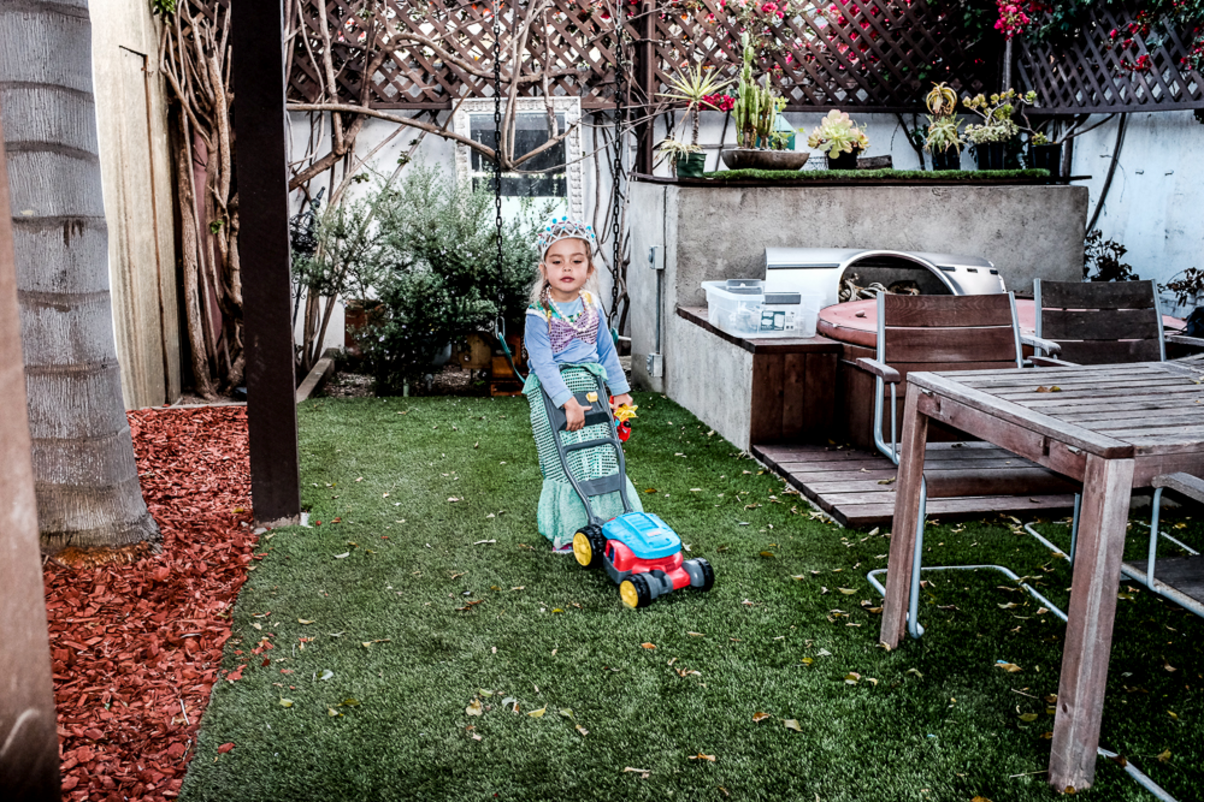 Time for another interview, this time with the surrealistic guru Jack Simon (San Francisco, California) who took some time out to speak with me and talk about the production of his latest zine entitled ‘People of Earth’.

For anyone that doesn’t know you, can you please introduce yourself?

I am a 73 year old psychiatrist living in the San Francisco area. I became interested in photography as a hobby about 15 years ago, developed a knack for street photography and now rarely go anywhere without a camera. Over time “my street” has evolved from the actual urban street to include anywhere in my personal life… Public or private.

Since my family is often with me, unplanned and unposed moments with them also appear in my photos. Rather than documenting life around me, I’m attracted to finding scenes that might create fictional stories in the minds of my viewers. I’m also one of the founding members of the street photography collective Burn My Eye. 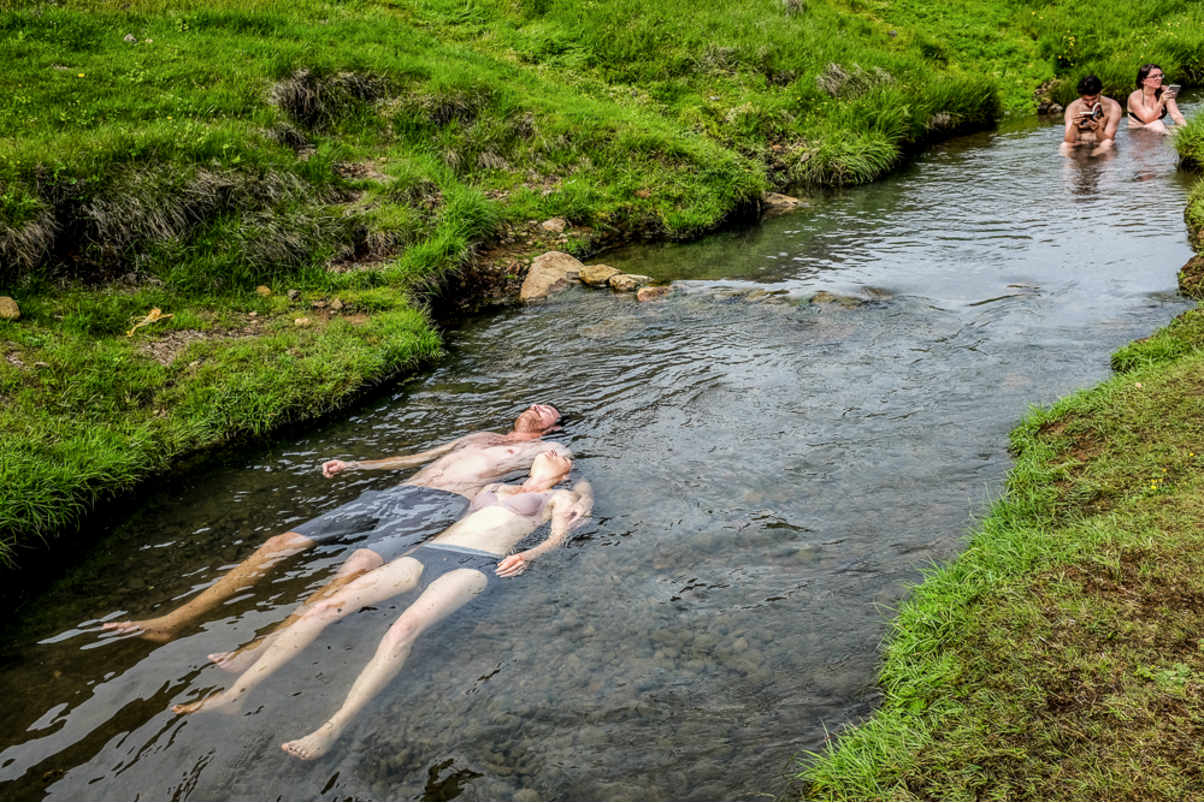 You’ve just published your People of Earth zine, do you mind taking a minute to talk about it?

My previous book SEVENTY was published at age 70 with 70 images. Almost four years later I wanted to create a book with new images and wanted a less expensive process than the print by demand used for SEVENTY. Also I liked the idea of book easier to hold, carry around…like the iPad which has replaced my laptop use. Ben Molina a local photographer has a good eye for zine production and I enlisted him to work with me. The zine is primarily his design and the edit was via a process of our work together.

I contacted Ben initially with an idea based on an unusually productive day in SF to produce a small zine with photos and perhaps some writing just based on that day. We had a short time frame as I wanted to have it for distribution at StreetFoto San Francisco 2017 which was occurring in 6 weeks. Although a couple of photos from that day made it into the zine, I was clearly just excited by a good day but did not have enough strong photos for a production…unless I wanted a very short book like 2-3 pages. Ben was encouraging that we could produce it in time. Neither of us are procrastinators fortunately and after 4 weeks of daily conversations the book went into production and was delivered just before the photography festival. 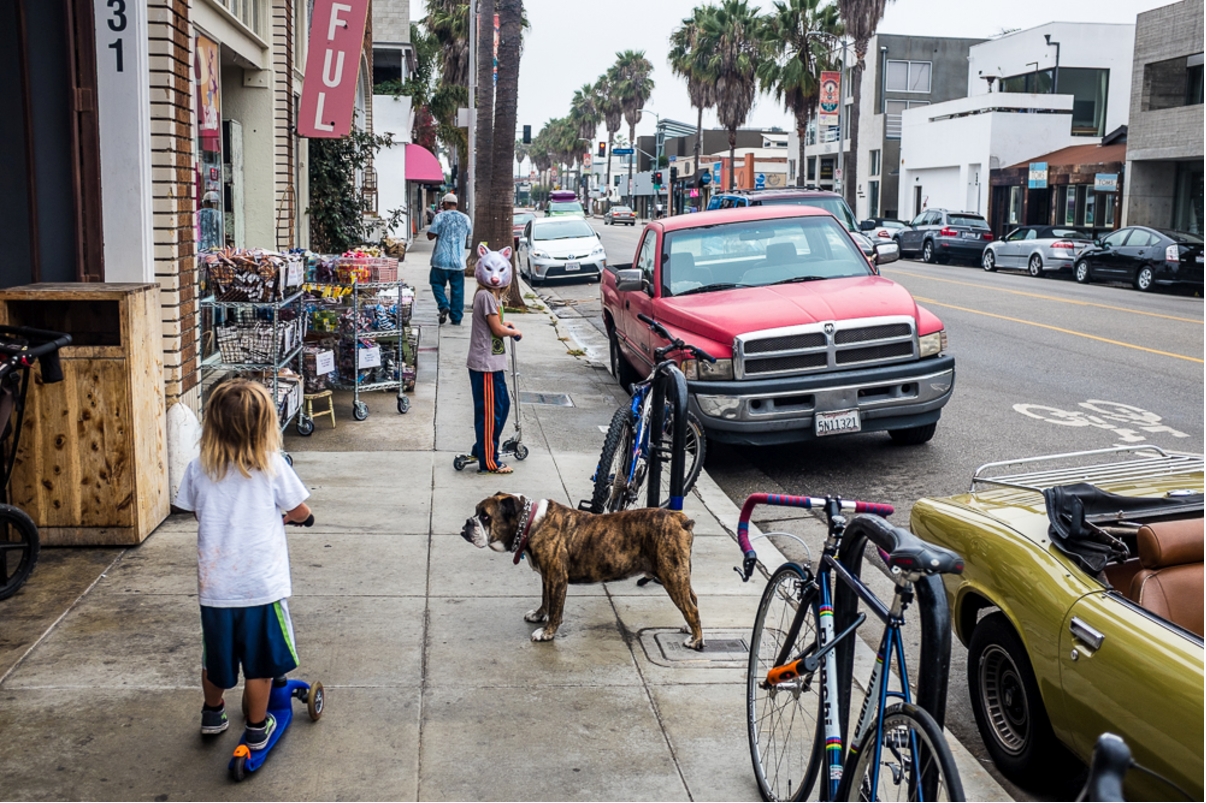 Wow that was a fast turn around! Do you have any tips on avoiding procrastination?

I just know if I put something on the back burner, it tends to stay there a long time. So I generally try to address some tasks ASAP. This applies especially to things I don’t like doing. 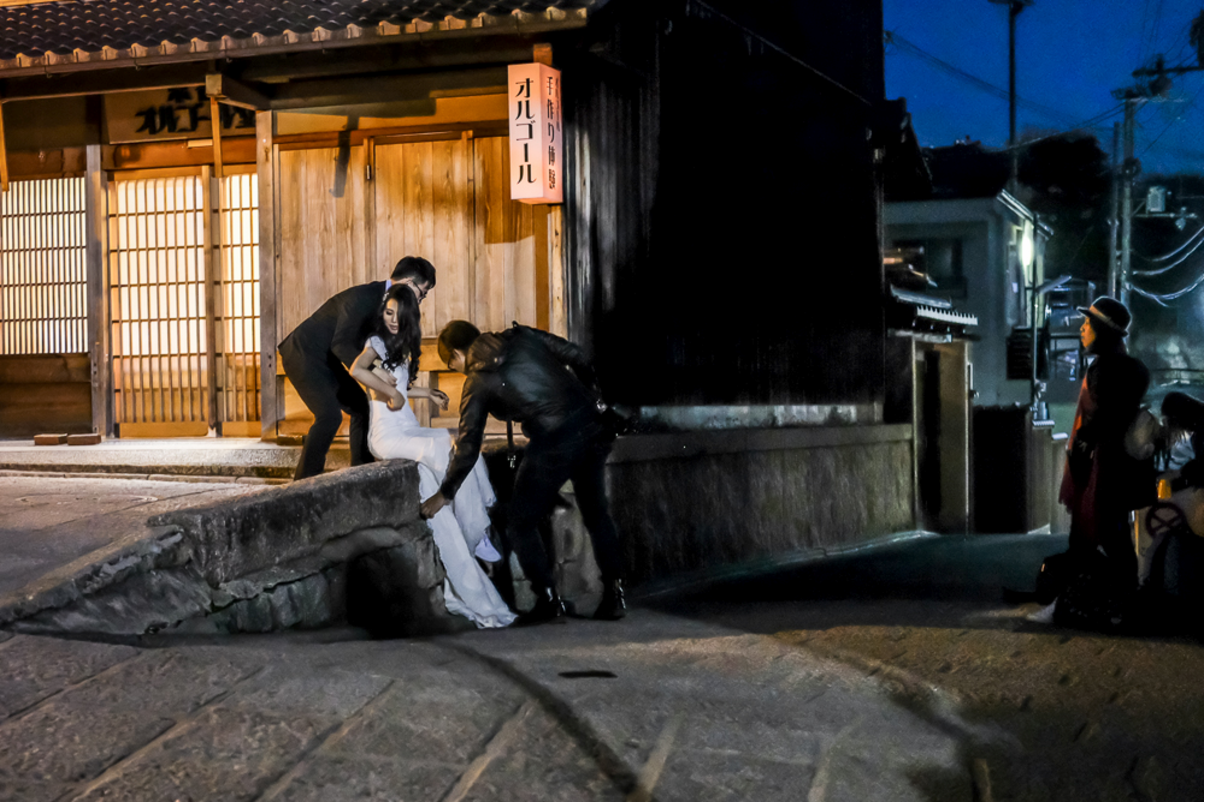 What themes run through the zine? Did you start out with the end goal of the zine in mind or was it something that came later?

The zine was just like my street photography in that there was no preconceived idea. We looked at my recent favorites and responded to what we saw. Ben came up with choices for groupings and full spreads, and I then responded to his choices. I’m attracted to the surreal, to creating imagined stories, to oddity and so hopefully this comes across in our choices. On my website I have one portfolio now with the theme of art chameleons and there are a few of these grouped in the book. 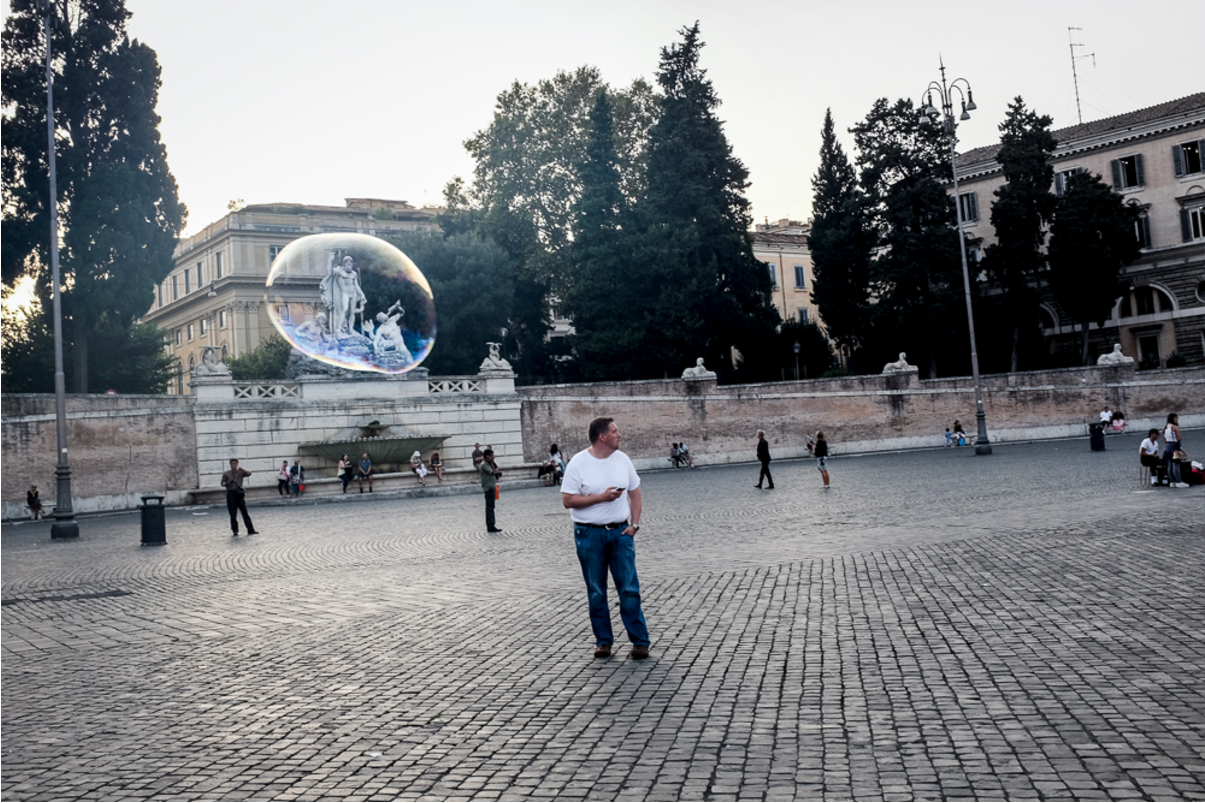 How did you find the editing process to select the final images for the zine? How many did you start with and how many did you end up with? I find I can’t edit and sequence on the computer, and print 6x4s to shuffle them around, what does your editing process look like? Did you have any help with it or get advice from trusted friends?

When I produced previous books I actually shuffled 8×12 images on the floor of my home office to create the edit. It made it difficult to walk in this room but I kept images on the floor for weeks until my final selection. With this production Ben did the heavy lifting with the edit. I produced an edit into a Flickr Album of photos I wanted him to consider…about 90 or so. So I’m not sure about his process in making his selections. After he created an initial spread for the zine, we spent a couple of weeks going back and forth with changes. For the most part we kept his ideas, but there were a few alterations with inclusions, exclusions, and decisions about the choices for the 2 page spreads. He was great to work with although I may have driven him a bit crazy with my changes. I did not realize until close to the end that I could actually put notes on his PDF’s of the book which would have made it clearer what I wanted.
Still having a good working relationship and both being motivated to get this out on time worked well for us.

It was illuminating to be able to see my own work through different eyes. Ben made a choice for the cover/back spread which I thought was brilliant. It was a photo I wasn’t sure I wanted for a final book but it worked well for the design of the cover and kept a surprise for the viewer to the end. My son, by the way, came up with the title and brief description. 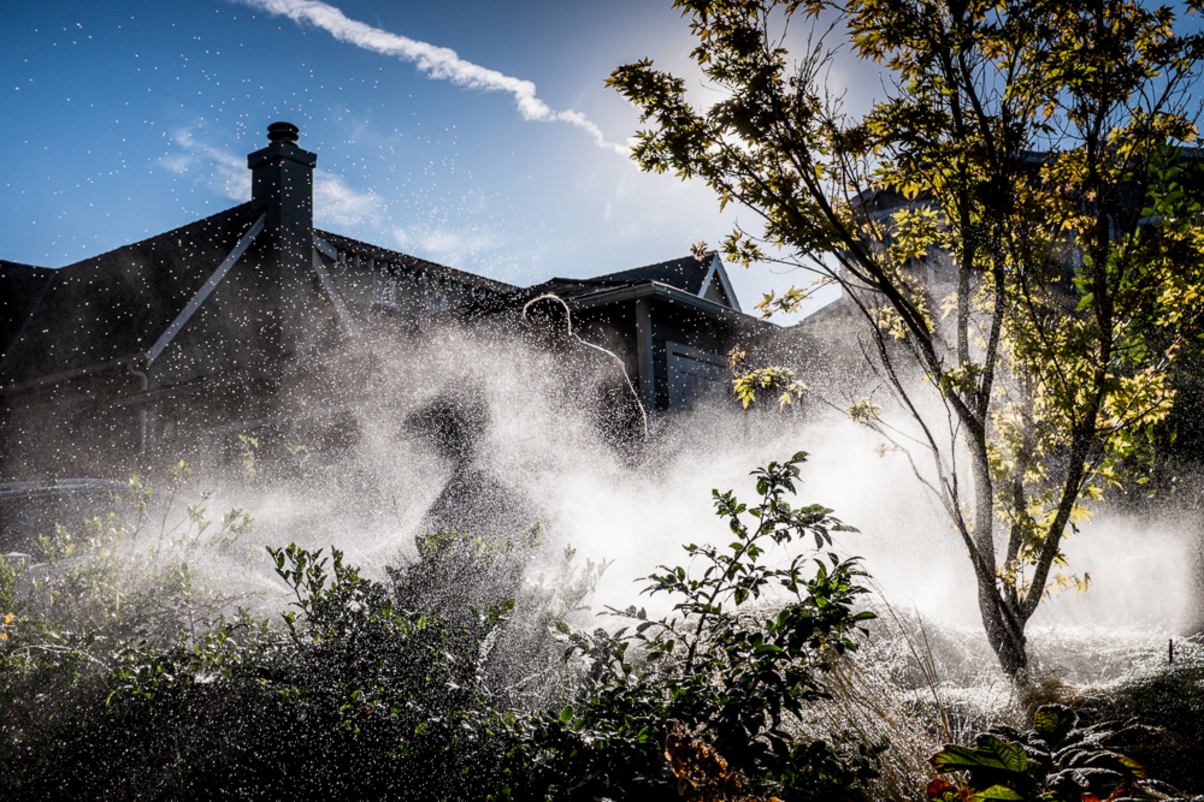 I was going to ask you about the description actually: “Jack Simon photographs the people of earth, a planet he has inhabited since 1943. These unposed images of terrestrial life were taken between 2013 and 2017”. It’s presented as if you’re an alien inhabitant of earth, as though you’re marvelling at the weirdness of humans. Assuming you are actually human (haha), what does that say about you? Do you see the world from an outsider’s point of view? I wonder how your working life as a psychiatrist has influenced your photography, you must have met some pretty unique individuals during that time that maybe made you more open to the idea of questioning ‘reality’?

My profession does leave me more open to questioning reality. No I don’t feel like an outsider and yes I am really human. But as with surrealism, I like the odd and unusual visualizations of life that conjure stories in my mind. My hope is to find images that might create stories for my viewers rather than showing them what life looks like. 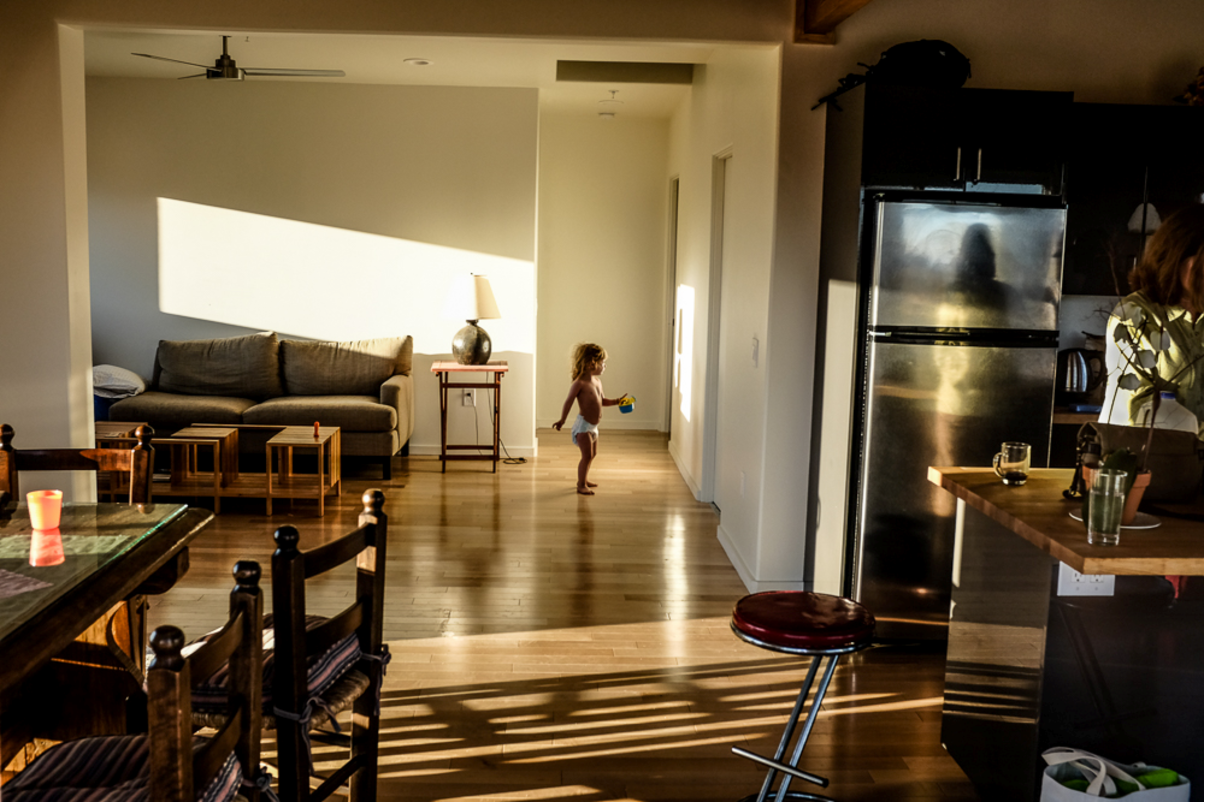 Do you think that having Ben design the zine and help with the final edit made it easier for you to hit your deadline? I’m planning to produce a couple of zines myself this year. I am a graphic designer, and have the skill set but the deeper I get into photography the more I realise I am a control freak and a perfectionist and I am wondering whether having the ability to do it all myself is more of a curse than a blessing. Was the editing process for People of Earth easier this time having someone else’s eyes on board versus Seventy which you edited yourself?

Yes, YES. For the reasons you find with yourself…too much perfectionism, second guessing, etc. Also we both were under a time limit as I wanted the zine produced before the festival in San Francisco.

Your previous book was published via blurb, but this time you chose to self-publish, what were your reasons for doing it yourself this time around?

Publishing by Blurb with their print-on-demand format creates a good but very costly process, even selling it at their cost. If you commit to a number of copies, you can keep the production costs much lower. I wanted to get my work out at a reasonable cost and hoped just to break even with a number of extras at my disposal. So the limited edition signed book along with a signed print could be offered for $30. 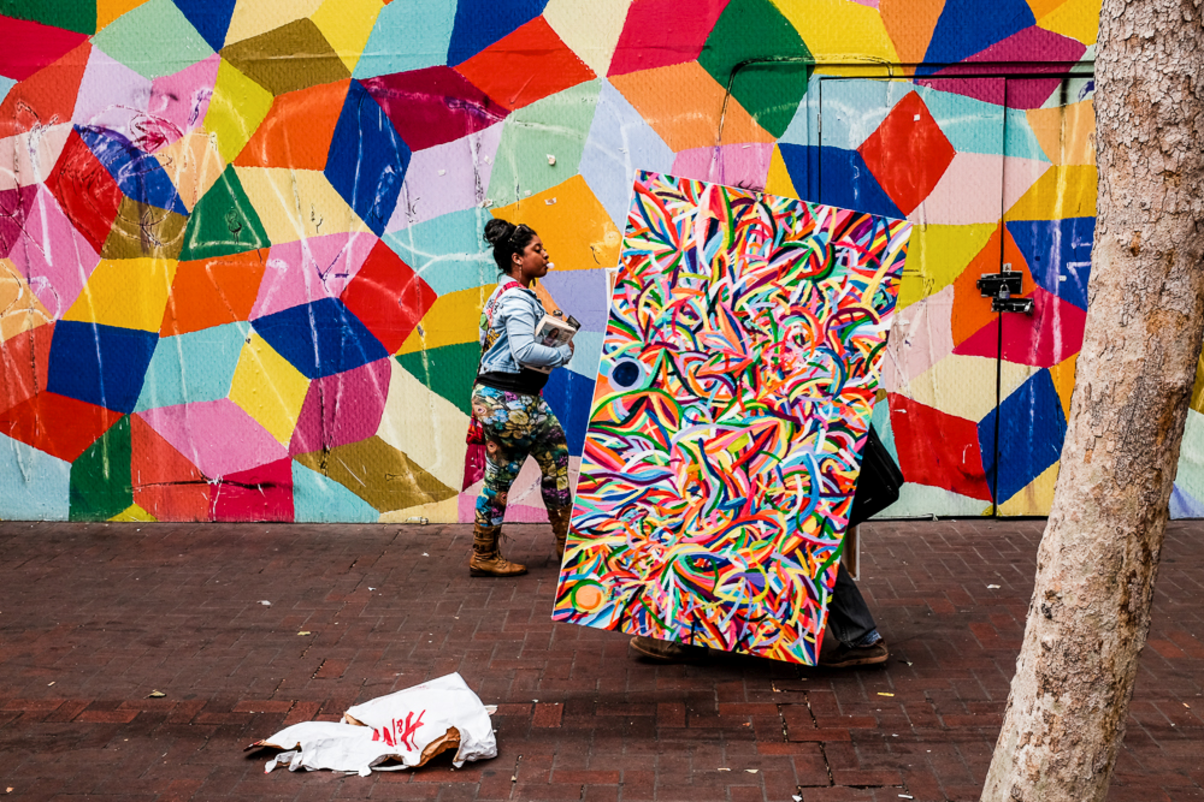 A lot of your photos are from your local area, but I noticed on your instagram you’ve recently travelled to Scotland. How does shooting locally differ to shooting somewhere new? And why Scotland?

My wife and I love to travel and many of the photos in People of Earth are from trips in the recent years. Scotland had been on my wife’s bucket list. Most of the photos are where I spend the most time…in the San Francisco area where I live and in Southern California where my two children and four grandchildren live.

As far as shooting somewhere new, I find I am more open to the unexpected since almost everything in a new environment is free of expectation. My level of excitement and visual eagerness is increased in new environments but in the familiar areas I do have more of a sense of where images might be more promising. 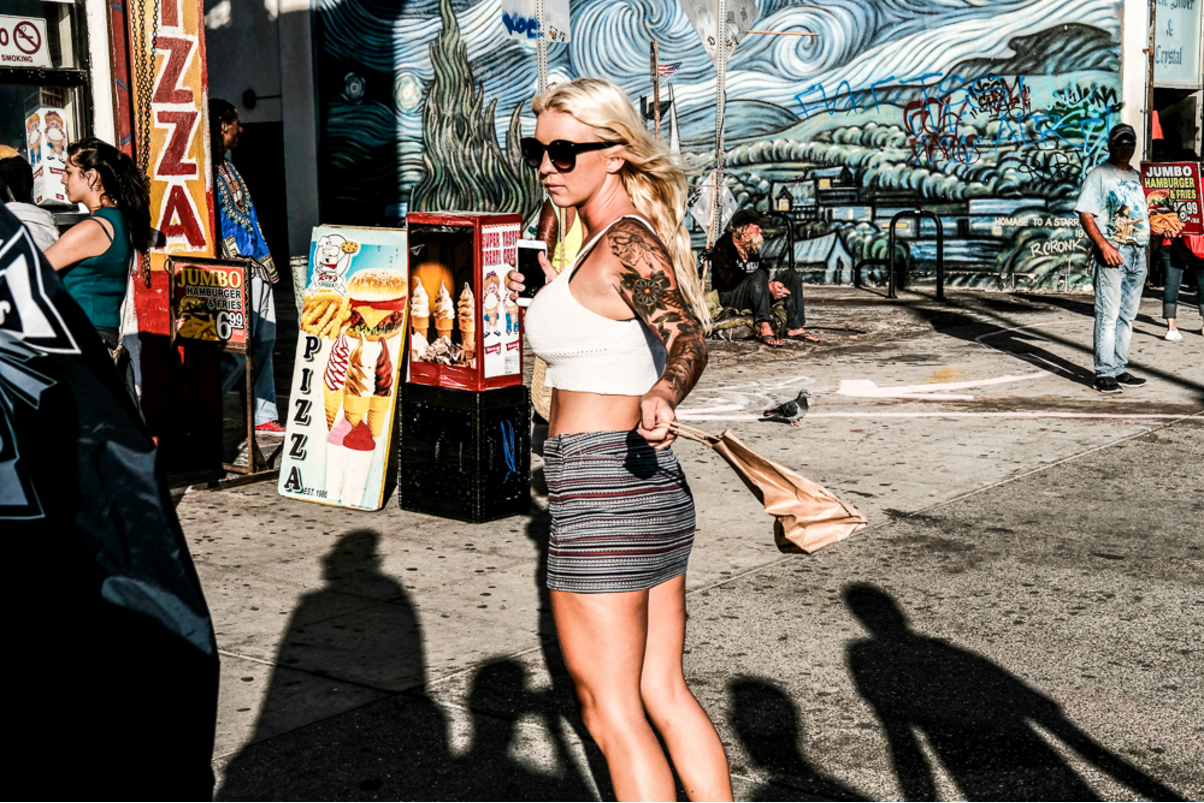 So it makes no difference to you where you shoot really? You’re always on the lookout for photos? I’ve hit a bit of a rut recently after a particularly active period of shooting, do you ever find it draining to be ‘always on’ when it comes to looking for a picture?

No, what I find draining is when I purposefully go to San Francisco with the hope of finding images and come home empty handed. When the active looking is disappointing for a period of time I can feel very discouraged and doubt myself more.

On the other hand most of the time I am just trying to experience and enjoy my life. My eyes are open for images but my purpose is more about the experience. If a photo comes my way, it’s a big bonus. Still in spite of saying that, I will back track and say that if I go some time without finding images whether I am looking or not, I will feel disappointed. Then again, if finding images came easy, where’s the challenge? I would not appreciate it as much then when the discovery arrives. 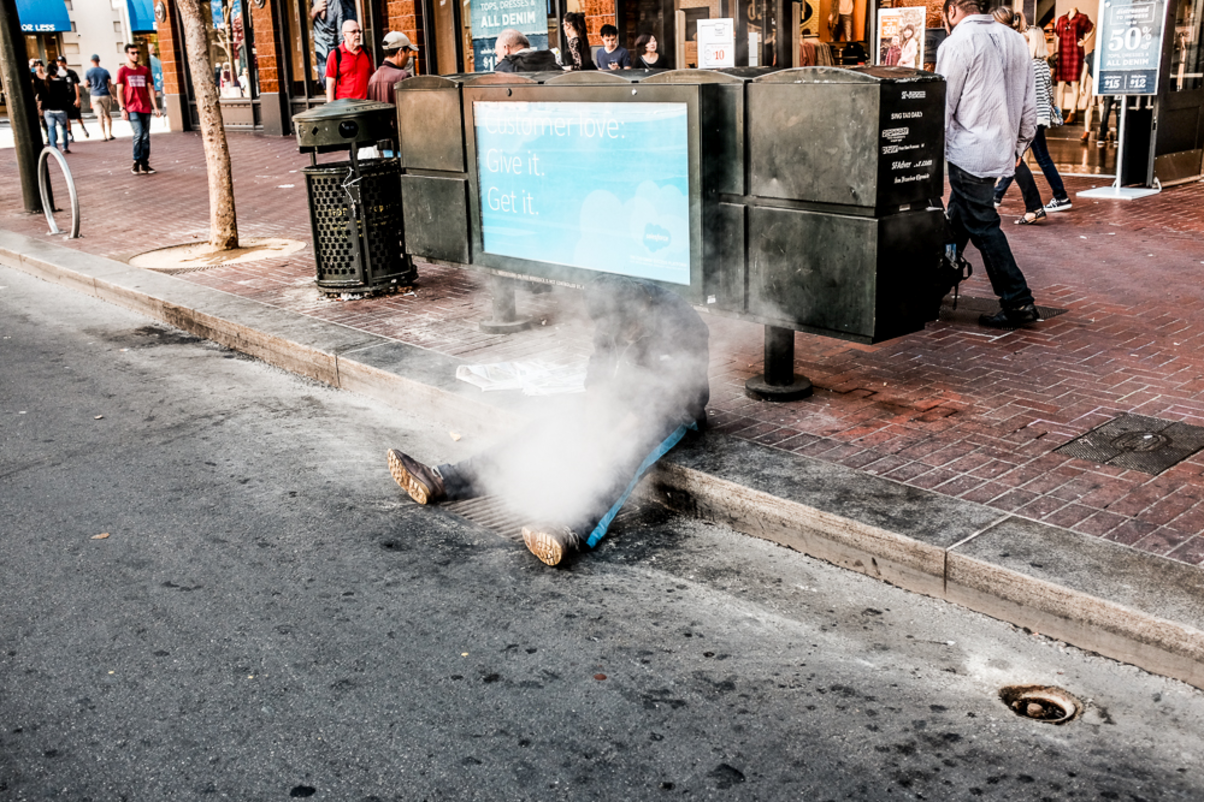 All of your photos are in colour. What is it that appeals to you about colour photography? Have you ever tried black and white?

Good question but no good answer. I’ve tried both, prefer the look of color and decided I was better off not mixing.

There are too many to name. I would say that I prefer seeing images in museums or books, of late, I’ve tended to see less and less online. Also many of my influences in photography are not street photographers. I am a big fan of Gregory Crewdson who is the opposite of a street photographer… He orchestrates, plans, directs, etc. for one image which also involves a tremendous amount of post processing. But I like the look and the style of his “stories.” My hope is to find scenes that might have some semblance to what he creates but without planning or posing or post processing work beyond simple adjustments. In a similar way the fashion photographers Tim Walker and Guy Bourdin and the surrealist painters create looks that hopefully influence what I like to find. 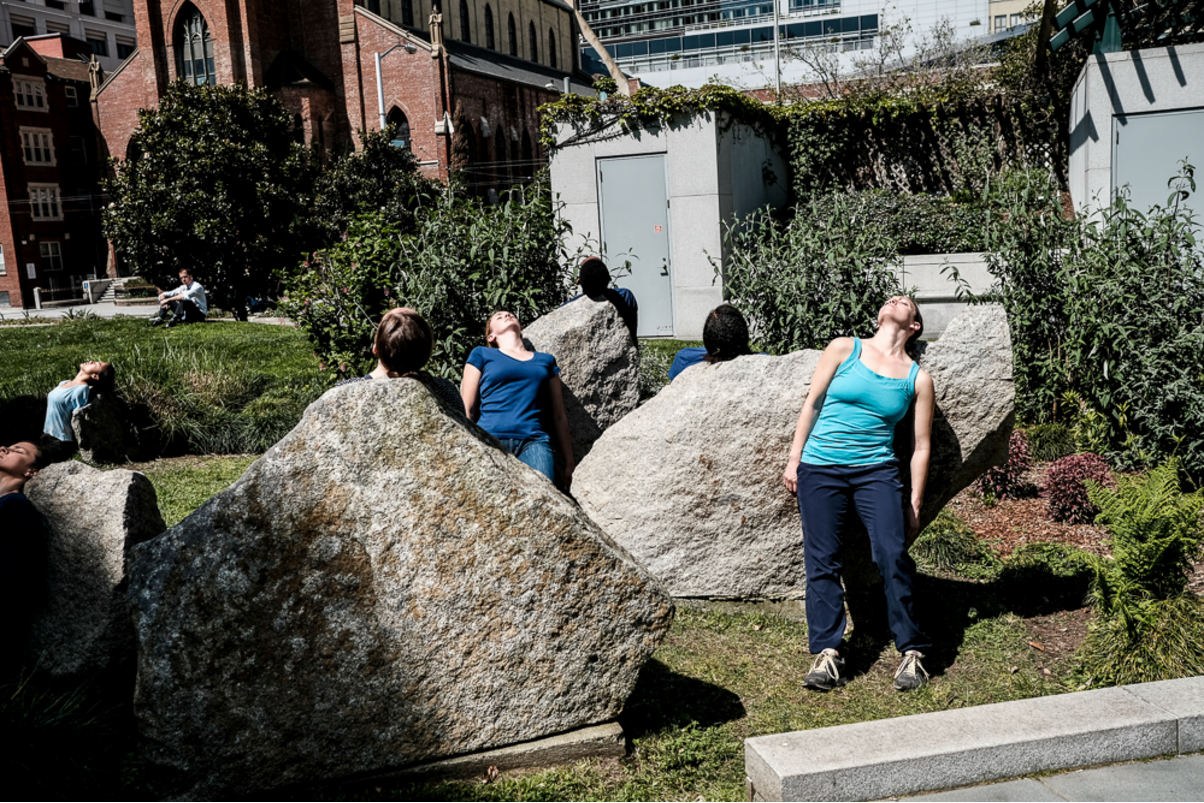 If you are interested in seeing more of Jack’s work, check out his website, flickr and instagram. If you’re lucky you may be able to pick up a copy of People of Earth here before it sells out.