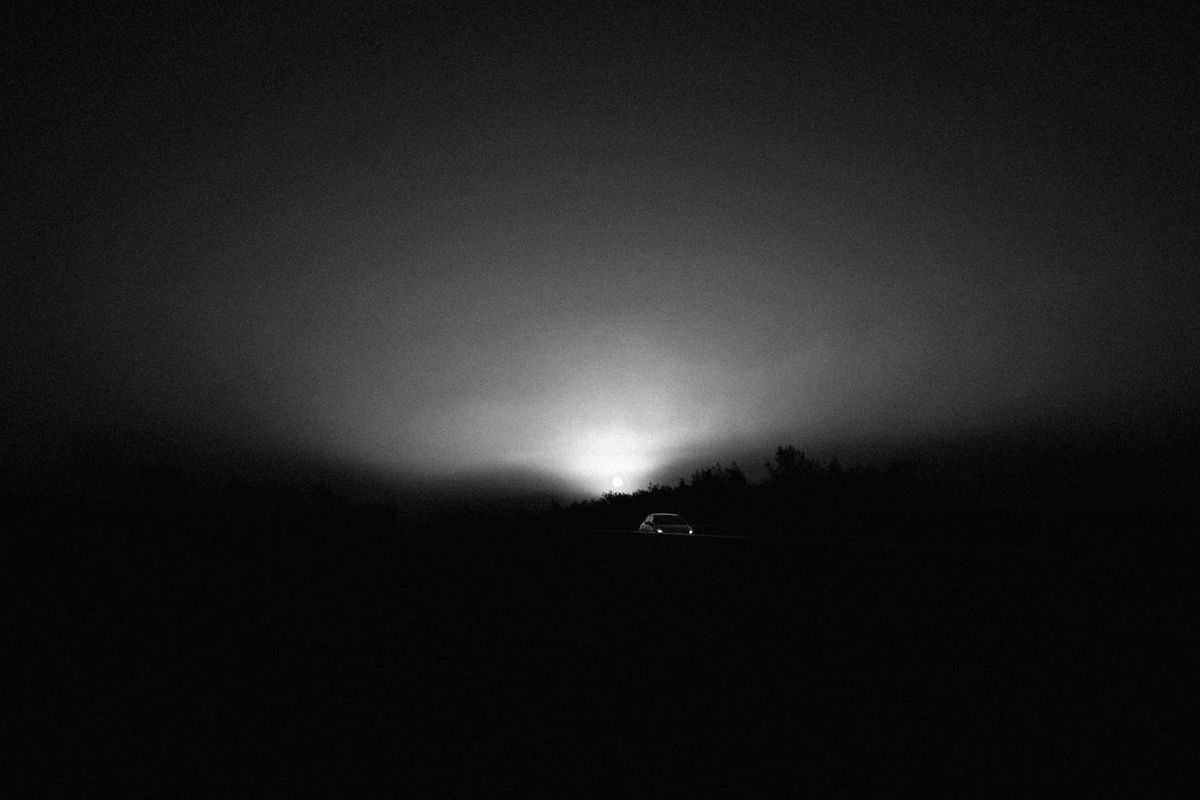 I hate winter. Actually, that’s not strictly true. I hate commuting in winter. I spend two hours a day in the car driving 35 miles each way to work and back. I leave in the dark and come home in the dark. It’s insanely boring and the dark nights and bad weather make it even more depressing. I’ve been doing this for 8 years, ever since I moved to Chester. Most of the time it’s not actually so bad. It’s thinking time. I tend to just switch off and zone out. I often snap back into the real world as I approach a roundabout and it takes a moment or two to get my bearings and figure out where I am.

I don’t know why but at some point this winter I took my camera out of my pocket and starting shooting randomly. Mostly out of frustration I think. I was uninspired and generally frustrated with my photography and this is the product. The image proportions are the same as the windscreen through which I captured most of them, they’re in black and white because I shot at really high ISO – there’s not much colour there to speak of anyway.

It seemed like a good idea at the time but in reality they’re all crappy photos. I guess you get out what you put in. This is an exercise in boredom and serves as a reminder of my failure to make a good photo. I was pissed off about being stuck in the dark and stuck in a car making shitty photos when I could be somewhere good. There’s no real reason for me to share this. But I made it, so I may as well. It tells a story at least.

There’s not many weeks that go by without an ambulance racing past me at high speed. The country roads I drive are dark and winding, and even more dangerous in the wet. One time I stopped after a guy fell off his motorbike and slid into a lamp post. I held him unconscious while huge bubbling blood clots haemorrhaged from his nostrils as he laboured to breathe. He came round as we waited for an ambulance to arrive; he was incoherently shouting and I had to physically restrain him as he wrestled to get his helmet off. I was concerned about him having back and neck injuries and making things worse. It took me and another driver to hold him still. I never found out if he survived the crash. That’s what I think about every time an ambulance goes past.

Tractors. Lots of tractors and oil tankers. I drive through the Cheshire countryside early in the morning. Getting stuck behind a tractor or a tanker is inevitable. When I first started making this journey eight years ago, I would try my best to overtake but after a few near misses on blind bends I’d learned my lesson. Besides, whenever I did get past, the tanker would somehow miraculously appear behind me again while I waited at the next set of traffic lights. So figured there’s no point. Just switch off and chill out. Being late for work is better than being dead.

Getting delayed because of roadworks is definitely part of my routine. At the end of the day I just want to get home. They have been resurfacing the roads for what seems like years. At least the potholes get fixed. They use these electronic signs to try and warn you about upcoming work but the cycle time of the screen is too slow and you’ve driven past before you can read when the roadworks will take place. Not that there’s anything I can do about it, there’s not really any way around them.

There are tons of bus shelters on this road. This is probably the most boring of all of them. Some of them have are dilapidated and have been overgrown with ivy. In all these years I can only recall seeing someone actually waiting for a bus once or twice. Weird.

Over the years they have systematically reduced the speed limits in an effort to cut down on accidents. At the same time, they’ve switched off a lot of the street lights to save on energy costs. This seems counter intuitive to me, but hey, that’s local councils for you. The journey used to take 50 mins, now it takes just over an hour. My average speed according to my dashboard is less than 30mph.

During winter I dread the low fuel warning light coming on. Standing on a freezing cold petrol station forecourt in the howling wind is no fun and there’s something about paying for the necessity of fuel that I find wholly unappealing.

Trees, hedges, hedges and trees, trees and pylons, more pylons. It just goes on like this. At least if the hedges weren’t there there’d be something to look at.

Every now and again you see something new. Like these birds flying overhead in a v-shaped formation. These little things seem amplified somehow and can help you appreciate what’s good in the world. Birds are so free, it’s hard for the sight of them to not cheer you up at least a little bit.

I change my route to and from work to try and make things a little more interesting. In winter, this doesn’t make much difference really because it’s dark anyway, but on Friday afternoons I finish work a little earlier which means I get to see a bit of daylight. I normally break up the journey by going to the supermarket in Nantwich to get Friday night treats. Beer! I’m really starting to cheer up by this point.

As I watch the remaining miles count down on the sat nav I start to feel even better. Driving into Chester, I’m starting to feel pretty damned good again. Especially when it’s Friday. Weekend lie ins, bacon sandwiches and staying in bed late with Faye are within touching distance now.

Waiting At The Lights

I pick Faye up from work on my way through town. Sometimes I have to wait a little while until she finishes but I don’t mind. I’m practically home now. If there’s enough time I’ll sometime park up and take a walk around town with my camera. When she finishes work it’s home to a nice warm house. I make a special effort to cook something good on a Friday. We normally settle down and watch a film.

Light at the End of The Tunnel

It’s starting to get lighter again now that the worst of winter is over. There’s some warmth in the sun, and spring is just around the corner. It’s sunrises like this that really lift my spirits. Things are looking up.

How do you get out of a rut in your photography? Do you just have to wait for it to pass? It mostly seems this way with me. Just hold tight and keep shooting. Even if they are bad photos.